Face
Value
Stream now
Face Value is a hip-hop album and multimedia project that puts the history of the Asian American community on record in a unique way.

The record touches on a wide range of issues, including immigration, American racism, and gender. Led by jason chu and Alan Z, they are joined by collaborators from a diverse team of East, Southeast, and South Asian women and men creatives, including Ronny Chieng, Dante Basco, Ruby Ibarra, AJ Rafael, Zeda Zhang, and more. 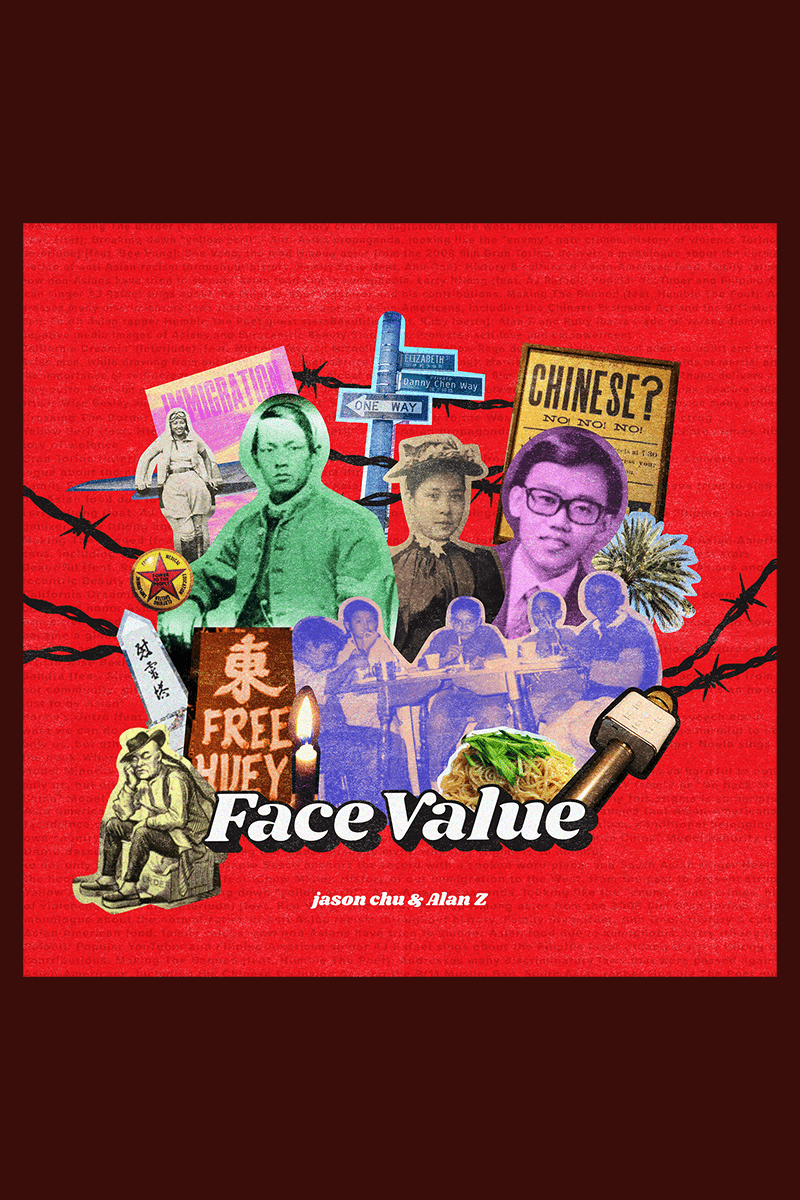 We Honor These Heroes

"What camp were you in?" was a common greeting between Japanese Americans during Warren Furutani's childhood. This history shaped the California Assemblyman's life and work, including co-organizing the first Pilgrimage to Manzanar, a Japanese American concentration camp, a tradition that continues to this day.
‍
As a young man in the 1960s, Furutani was influenced by the Black Power movement. Studying Black writers and attending protests ignited a spark in him to pursue a future where Asian American voices could take part in the conversations around race. His efforts have directly led to the recognition of Manzar as a historic site, and the establishment of Fred Korematsu Day in remembrance of Korematsu's Supreme Court case fighting against Japanese American imprisonment.

In 1969, a group of NYC Asian American artists began gathering in a basement on Catherine Street. Within a few years, their movement would grow to dozens of members, publishing radical newspapers, creating art, and spearheading activist movements in Chinatown. They became known as The Basement Workshop, and their members would take inspiration from the Chinese Revolution, the Black Panthers, and other radical movements to formulate an Asian American ethos and identity.
‍
Among their ranks were well known figures like Corky Lee, photographer/documentarian, and Nobuko Miyamoto, Charlie Chin and Chris Kando Ijima, who recorded the album "A Grain of Sand." Through their organizing efforts, Asian American creatives found a voice, and their members would go on to impact the culture after the Workshop closed its doors.

Yuri Kochiyama's life intersected with America’s most important moments. Born in 1921, incarcerated for being Japanese in 1943, in 1960 she moved to Harlem, NY and began a decades-long fight for liberation. She was a member of Asian America and Black civil rights organizations, as well as the founder of Asian Americans for Action.
‍
She famously met and bonded with Malcolm X over shared beliefs in racial justice and rights. When Malcolm X was assassinated, she was there by his side. From the 1960s on, she would remain committed to fighting for BIPOC liberation and pushing radical, community-based philosophies.

Grace Lee Boggs lived to be 100 years old, and she spent most of that century engaged in Black organizations while becoming a central figure in the Asian American Movement as well. Enduring a lifetime of discrimination, she found herself swept up in Black-led protests in her Chicago community, setting her on the path of radical social justice.
‍
She would move to Detroit to edit a leftist newspaper, where she would live out the rest of her life. In Detroit, she would create the Detroit Asian Political Alliance, and continue her work with the Black community. Her name is synonymous with progressive values, grassroots support, and racial equity, a legacy carried on at her namesake Boggs Center, a hub for activist organizing in Detroit, and the James and Grace Lee Boggs School, which educated Detroit youth with the values the Boggs couple upheld.

CAAAV was founded in 1986, when working class Asian women organized themselves to build community power among immigrant, refugee, and impoverished communities in New York City.

Their work encompasses protecting the residents of Asian communities from gentrification, fighting for adequate resources in public housing for immigrants, and providing young Bangla, Korean, Mandarin, and Cantonese speakers the chance to work with low-income communities and advance themselves via internship experience.

Sex workers are among the most vulnerable members of our society. Red Canary Song works to provide safety for them, with a focus on Asian and migrant sex workers. Their work has been spotlighted internationally in the wake of the Atlanta spa shootings, and they've provided extensive resources on the needs of the community.

Based in the heart of San Francisco's Chinatown, APIENC provides services and community to queer APIs in the Bay Area to build towards a safer, brigther future for our entire community. In addition to inspiring leadership among queer, non-binary, and gender noncomforming Asians, they also take on climate change and support other orgs in fighting for trans justice and many other shared goals.
‍
In addition to 'equality,' APIENC teaches values of honoring history, abundance, honesty & vulnerability, innovation, reciprocity, and self-determination. These pillars guide their members in carrying on the legacy of API activism and organizing to achieve solutions that protect and nourish our queer community.

In 1923, Bhagat Singh Thind fought to expand the definition of “American” to include South Asians. An Indian immigrant and practicing Sikh, Thind enlisted in the US Army during World War I and applied for citizenship during his service. Initially granted to him, the federal government revoked his citizenship days later on the basis of his "Hindu" nationality. He was soon embroiled in legal struggles on his quest to obtain full citizenship rights, bringing his dispute to the Supreme Court.The Court ruled that Indians could not be considered White or of African descent, empowering the US to not only deny Thind his citizenship but to further strip citizen status from Indians who had already received it. Around 50 Indian Americans lost their rights as a result of the case.Thind would eventually win his fight against the US after nearly 20 years, when Congress passed the Nye-Lea Act, making all WWI veterans eligible for citizenship regardless of race.

The life of a Japanese American during World War II was not easy. When the war began, Fred was living and working in the Bay Area, losing job after job due to discrimination for his Japanese heritage - even being turned away from the US Navy upon being drafted. When the order to imprison all Japanese Americans was issued, Fred resisted and went into hiding in Oakland, but was caught and taken to trial. The ACLU took up his case, fighting for his chance to prove his loyalty in court, to no success, and in September of 1942 him and his family were taken to the Topaz, Utah concentration camp, where he was often shunned by other Japanese for fear of associating with an infamous rebel. In the decades following the release of Japanese Americans, Korematsu tried to live a quiet life fighting against racism around him, but shied away from drawing major attention to his case. Only after lawyers discovered that Korematsu's prosecutors suppressed FBI evidence that may have helped him beat his case, was his conviction overturned in 1983. He would go on to be honored with the Presidential Medal of Freedom in 1998, and served his community as a church ledaer, Boy Scout volunteer, as well as resuming political activities fighting against injust treatment of Americans of all stripes until his passing in 2005.

Mabel Ping-Hua Lee became the symbol of the new era for women in America, at a time when the Chinese Exclusion Act prevented Chinese people from obtaining citizenship and voting rights. Her activism ranged from leading a suffrage parade of roughly 10,000 people by horseback in New York City on May 4th, 1912, to countless scholarly feminist essays, emphasizing the significance of extending voting rights and equal opportunites to women. By 1921, Lee became the first Chinese woman to graduate with a PhD in economics from Columbia University. Shortly after her father’s death, Lee filled in his position as director for the First Chinese Baptist Church of New York City, known today as 21 Pell Street. There, she dedicated the rest of life to developing a center which offered a health clinic, a kindergarten, vocational training and English classes to empower the Chinese community.

Mamie Tape was only eight years old when her parents, Joseph and Mary Tape, sued the San Francisco Board of Education over a local public school’s refusal to admit their daughter over her Chinese descent. Tape’s parents argued that her exclusion was a direct violation of the California Political Code of 1884, which stated that “every school, unless otherwise provided by law, must be open for the admission of all children between six and twenty-one years of age residing in the district.” After a year of deliberating in the California Supreme Court, the Tape family won the landmark court case, which led to the establishment of “separate but equal'' segregated schools. The success of the Tape v. Hurley case became the bedrock and catalyst for the fight for continued school desegregation in America.

Kiyoshi Kuromiya was a committed civil rights and anti-war activist. He was the founder of Philadelhpia's Gay Liberation Front and served as an openly gay delegate to the Black Panther Convention. Kuromiya was also a loyal assitant to Martin Luther King Jr and became a caretaker for King’s children immediately following his assassination.One of Kuromiya’s most ambitious demonstrations was when he protested the use of napalm in the Vietnam War in 1968 by announcing his intention to burn a dog alive on campus at UPenn. When thousands of people came to protest the act, they found only that Kuromiya had left a message that read "Congratulations on your anti-napalm protest. You saved the life of a dog. Now, how about saving the lives of tens of thousands of people in Vietnam.” In the fight against the AIDS epidemic, Kiyoshi founded the Critical Path Project, which became one of the earliest, most comprehensive sources of HIV treatment, publishing newsletters that reached thousands of survivors across the globe. Now known as The Critical Path Learning Center, Kiyoshi’s legacy lives on in the form of an educational and stigma-free community space, devoted to the intersection of health and literacy in the digital age.

In the aftermath of Hurricane Katrina in East New Orleans, local, young Vietnamese leaders organized cross-culturally and cross-generationally to voice concerns about the toxic waste dumping happening in their historically low-income, Vietnamese refugee communities. From this, VAYLA New Orleans was born. ​VAYLA seeks to empower AAPI leaders in New Orleans, grounding themselves in anti-racist, Queer, feminist frameworks and putting issues of environmental justice, reproductive justice, and civic engagement at its forefront.

The WOW Project is a community-based initiative on historic Mott Street in NYC's Chinatown. They create space to center femme, non-binary, trans, and queer voices in the community through creative culture and activism. Headquartered in Wing on Wo, Chinatown's oldest ceramics shop, the collective also keeps an eye on sustaining ownership of Chinatown's future, by building bridges across generations of residents and creatives, while uplifting young women and non-binary youth.The WOW Project was started in 2016 by Mei Lum, a 5th generation owner of Wing on Wo. Since then they have provided spaces to hold conversations about the community's future, artist residency programs to nurture creative minds, and has remained engaged in Social and cultural conversations surrounding Chinatown’s future for many generations to come.

There are so many heroes to thank, and give our deep apreciation to.

We could not thank every one of the countless, powerful, individuals and groups that were pivotal in bringing awareness and power to the Asian American Community. Our hope is that reading the stories of these heroes inspires you to learn more about this incredible history.